As the weak, inept and crooked little man named Barack Obama ponders bombing his Nobel Peace Prize-winning SEVENTH country it seemed like a good time to take a look at the absolute joke that the Peace Prize has become in the past several decades. 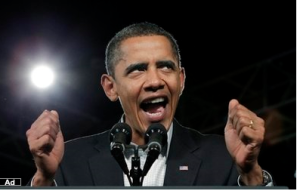 Callous murderer of four human beings at Benghazi just to spare himself embarrassment and inconvenience while running for reelection.

THE KILLER: BARACK OBAMA, (D) – This economy-destroying, healthcare-ruining, job-eliminating and race-baiting demagogue has killed even more people than the repulsive George W Bush did! If Bush’s body-count had been higher he may have qualified for a Nobel Peace Prize himself. In his spare time Obama loves killing people with drone attacks, denying them the due process he insists upon for even the most violent Muslim terrorists.

MOST HIGH-PROFILE MURDERS: The callous killing of four Americans -one of them our Ambassador – at Benghazi just to avoid embarrassment and inconvenience during his reelection campaign. Alleged human being Obama then persistently lied about what was really an Al Quaeda attack, claiming the assault on the U.S. facility was a spontaneous protest over a youtube video. What a kidder! Little Barry perpetuated this lie over the coffins of the slain Americans and even imprisoned the maker of the youtube video in true would-be dictator fashion!

Christmas cards from this monster feature shrapnel plus dead and maimed children!

THE KILLER: HENRY KISSINGER (R) – This faux diplomat, whose doctoral thesis dealt with the practical use of nuclear arms in contemporary warfare and statecraft, arguably bears as much blame for U.S. debacles in southeast Asia as RIchard Nixon and Lyndon B Johnson bear. Henry the K’s duplicitous Cold War-era machinations might have made even Talleyrand say “Dude, find a conscience” and were basically a 20th Century version of 19th Century attitudes toward less-empowered nations.

MOST HIGH-PROFILE MURDERS: The Christmas bombings of Bach Mai Hospital during the Vietnam War. Henry Kissinger may be the only War Criminal in history to date noted women like Marlo Thomas and Jill St John. People like Snowden and Manning are treated like criminals yet Kissinger could walk around free and get treated like a revered statesman. It’s hard to say which was more absurd: Henry being made Secretary of State or his Nobel Peace Prize. By the way there’s no proof that the fictional character Tony Soprano was based on Kissinger, so ignore those stubborn rumors.

Which murderous Nobel laureate is your personal favorite? You can vote via my FAQ page.