AL SHARPTON: “IT’S RACIST TO ARREST TWO BLACK KIDS BUT ONLY ONE WHITE KID FOR KILLING THAT AUSSIE HONKY!” 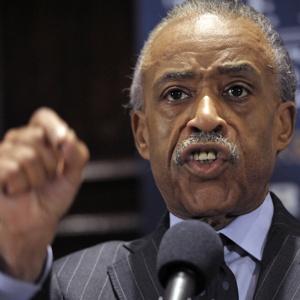 Al Sharpton, emaciated racist and homophobe, has cried foul once again. When three teenagers recently shot a young Australian man attending college in the U.S. the odd number of assailants meant that two black perpetrators were arrested but only one white teen. Citing this as a clear case of the way the American justice system discriminates against African Americans Sharpton called for protests in every major city.

The object of these protests would be to insist that the number of white criminals arrested in mixed-race crimes MUST be equivalent to the number of black criminals arrested. Attorney General Eric Holder, known for his efforts to break EVERY crime on the books while heading the Justice Department, expressed solidarity with Sharpton.

“Either arrest a random white dude or let one of the black dudes go!” the perpetually sleazy-looking Holder exclaimed to a cheering crowd of African-Americans with criminal records. (In other words, his staff).

Professional golfer Barack Obama took time out from practicing his putting to offer this comment:

“If I had a son he would look like the two black teens arrested for the killing, NOT like the white trash Aussie who got in the way of their bullets, so my attitude of ‘My skin color right or wrong’ means this is a clear case of mistaken arrest. The white kid’s parents should be sent to Sensitivity Training for their callous way of disregarding the self-image of African American males with the racist way they wept over their son’s murder.”

Meanwhile Nancy Pelosi called for a national day of mourning for all the black people unjustly imprisoned for killing their white oppressors.

DISCLAIMER: Obviously this is satirical, like a news story in The Onion.

22 responses to “AL SHARPTON: “IT’S RACIST TO ARREST TWO BLACK KIDS BUT ONLY ONE WHITE KID FOR KILLING THAT AUSSIE HONKY!””