The Frontierado holiday is coming up on Friday, August 3rd and Balladeer’s Blog continues presenting holiday- themed articles. I know that in reality the gunfighters of the old west were thugs and worse but Frontierado is about the myth of the American west, not the grinding reality.

As the glorious day approaches and we are all making our holiday preparations enjoy a sampling of this group of colorful characters who don’t get the attention – or movies – they deserve.

1. BEAR RIVER TOM – That’s our top-ranked figure in the photo to your left. One of the few actual gunmen to wear a fancy two-gun holster, Bear River Tom Smith’s myth begins with his birth in 1838 in New York City. He either did or did not serve in the Union Army in 1861 (accounts vary) but was definitely part of the NYC police force by 1862. In 1867 he headed west, working as a laborer laying track for the Union Pacific Railroad  in Nebraska.

By 1868 the crew he was with had reached Wyoming, where the Hell On Wheels town of Bear River sprang up around their work camp. Bear River was to wild, lawless railroad towns what Dodge City, Kansas was to wild, lawless cattletowns. Bear River Tom put his guns, fists and law enforcement experience to work protecting the town’s citizens from the drunken excesses of the railroad workers and the railroad workers from the Vigilante mobs the Bear River inhabitants had formed to curb the lawlessness.

This twin conflict became threeway when the railroad tycoons began sending in strike-breaking thugs to bust the heads of any laborers trying to organize a union. Legend holds that Tom had shot 14 men dead and left many more wounded by the time everything came to a head in the Bear River Riot of 1868. Some laborers were (supposedly falsely) imprisoned in the Bear River jail. Tom and some fellow railroad workers invaded the town and amid prolonged exchanges of gunfire with Vigilantes and strike- breakers freed their coworkers, destroyed the jail and trashed the anti-labor newspaper. Bear River Tom himself was severely wounded and order was restored only by the arrival of troops from Fort Bridger.

Tom recovered from his wounds, gave up drinking forever as he promised God to do if he lived, and continued protecting the railroad workers as construction continued westward into Utah. On May 10th, 1869, at Promontory Point, the Transcontinental Railroad was completed and Bear River Tom signed on with the Kansas Pacific Railroad to protect laborers and townspeople from each other in Colorado.

In May of 1870 Smith became a traditional town Marshall for violent and lawless Abilene, Kansas and tamed it by enforcing the local ordinance that only he could carry firearms in town. Wyoming Frank and Big Hank were the first two Kansas outlaws to fall to Abilene’s new Marshall but were far from the last. Eventually, by November of that same year Bear River Tom tried to bring in the murderous gunslingers Moses Miles and Andrew McConnell but was shot down with rifle fire from his quarries, who finished off the dying man with an axe. Abilene returned to its lawless ways until Wild Bill Hickok himself replaced Bear River Tom Smith as Marshall in the spring of 1871.

2. POKER ALICE –  The gambler/ gunfighter Alice Ivers aka Poker Alice was born in England in 1851. In 1863 her family moved to Virginia, then part of the Confederate States of America. Alice attended finishing school where she learned the mannerisms (and pretensions) of Southern ladies  accompanied by the sounds of the distant Union cannons as the Civil War raged. After the Confederacy was defeated in 1865 the Ivers family drifted westward and by the late 1860’s were living in Leadville, Colorado, where Alice’s father found work as a teacher.

Alice married Leadville mining engineer Frank Duffield, a veteran gambler who taught his young bride various permutations of poker until the student exceeded the master, to use an old saying. In 1871 Frank died in a premature dynamite explosion during mining excavations. The young widow Alice began packing a Colt .45 for protection and became a fixture in various Colorado mining camps earning more money through her skill at card- playing than her husband ever did as a mining engineer.

Now sporting the nickname Poker Alice our heroine adopted what she felt was a “more ladylike” .38 caliber pistol instead, but continued her habit of smoking cigars. She began traveling throughout other Western territories as well, winning some large pots and losing a few others, distracting male opponents with her Southern charm and supposed beauty and also engaging in periodic gunplay to defend herself from overly amorous admirers or fellow gamblers accusing her of cheating. Poker Alice never gambled on Sundays, however, and was known to head east to New York City for magnificent shopping sprees after winning her many four-digit poker pots (in 1800’s dollars).

Poker Alice began attracting big crowds in saloons and gambling halls from Silver City, Nevada to Deadwood, South Dakota, and even worked as a dealer at Bob “I shot Jesse James” Ford’s casino. She reveled in her celebrity status, regaling her fans with tales of poker games, monumental shopping sprees back east and gunplay with some of the dangerous characters in the odd circles in which she traveled. In 1890, while playing cards at Bedrock Tom’s Saloon Alice used her .38 to save the life of fellow gambler Warren Tubbs, who went on to become her second husband.

The couple settled in Sturgis, SD, went straight and raised seven children. In 1910, after 20 years of marriage, Warren Tubbs passed away and Alice once again hit the saloons and casinos. She amassed enough winnings to open Poker Alice’s Palace between Sturgis and Fort Meade, with gambling downstairs and a brothel upstairs and drinking on both floors. Her final gunfight took place in 1913 when she killed one soldier from Fort Meade and wounded others when their carousing in her Palace got out of hand. Alice buried a third husband, George Huckert, who ran her sheep ranch for her, and was in and out of trouble with the law until her death in 1930. (FOR KLONDIKE KATE, X THE VIGILANTE, DIAMONDFIELD JACK AND SAM SIXKILLER CLICK HERE

3. KID CURRY – Harvey Logan, aka Harvey Curry aka Kid Curry, saw more real-life action than many of the better-known legends of the west. In 1883 he and his three brothers, Louis, Johnny and Henry, stole some horses and fled their Missouri home, headed west. They became skilled rustlers and by the late 1880’s had established a ranch near Landusky, Montana with stock rustled from throughout the Powder River area. Kid Curry created a local scandal via his romance with Elfie Landusky of the town’s founding family.

The famous rustler supposedly tried going straight at Elfie’s urging, but when she showed evidence of pregnancy despite the lack of a wedding ring the Kid clashed with the male Landusky’s and fled after the fatal shooting of patriarch Pike Landusky. The Curry brothers now fled to Wyoming and signed on as rustlers and train robbers with the Hole In The Wall Gang  faction led by Black Jack Ketchum. In late 1895 rancher/ gunman James “Scattergun” Winters was informing on the Gang’s activities. The Curry brothers tried to silence him in January of 1896 but Scattergun Winters shot Johnny Logan to death and drove the others off.

Returning to Wyoming, Kid Curry and his brother Louis, now known as “Flatnose” Curry, joined up with Butch Cassidy’s Wild Bunch faction of the Hole In The Wall Gang. In June of 1897 Kid Curry and the Sundance Kid were arrested during an attempted bank robbery and jailed in iconic Deadwood, SD, but soon escaped. The next two years saw the Wild Bunch involved in train and bank robberies and  increasingly deadly shootouts with posses, prompting Kid Curry, “Noose” Carver, Butch and the Sundance Kid to lie low in Fort Worth at Fannie Porter’s brothel for several months.

The Kid spent 1900 and 1901 robbing trains and banks with the Wild Bunch, hunting down and killing any lawmen who were able to kill various Wild Bunchers and even settling an old score by at last gunning down his brother Johnny’s killer Scattergun Winters. On December 13th, 1901, Kid Curry was arrested after wounding two lawmen during a tavern fight in Knoxville, TN, where he had been hiding out. The Kid was sentenced to twenty years but escaped prison on June 27th, 1903. Not long after, Kid Curry and two new accomplices were killed in a shootout with a posse after they robbed a train near Glenwood, CO. Some accounts hold that the Kid killed himself with his last bullet to avoid going back to prison. 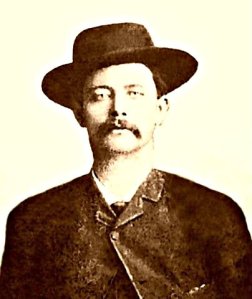 Like his fellow neglected western figure Tom Bell, Rattlesnake Dick was part of the often forgotten First Wave of western legends, along with people like Kit Carson and Joaquin Murrieta. After unsuccessfully prospecting for gold around California’s Rattlesnake Bar, the area he was nicknamed after, Barton turned to outlawry. ( Some accounts mistakenly claim he was called Rattlesnake Dick because he was “as quick on the draw” as a rattlesnake when it strikes) He formed a gang and began robbing mule trains loaded with gold from various successful mines in California.

Rattlesnake Dick’s right-hand man Cyrus Skinner was shot to death in a gunfight with Wells Fargo detectives in the 1850’s. He died before being able to reveal where he had just hidden the gang’s latest large haul of gold and that lost treasure was much sought-after for years. As the 50’s wore on Rattlesnake Dick himself got caught red-handed with some mules he had stolen in preparation for another of his countless mule train robberies. Sentenced to prison, the Dickster escaped in 1856 and spent the next three years as a stagecoach robber. In July of 1859 Rattlesnake Dick was shot down during a prolonged exchange of gunfire with a pursuing posse after a robbery.