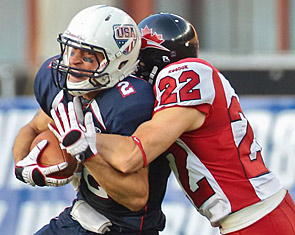 The United States produced a stunning display of offensive fireworks and defensive dominance to humble Canada 50-7 in the Gold Medal game of the 2011 IFAF Senior World Championship and defend the world title it won in Japan in 2007.

USA scored 21 points in the final 1:51 of the first half and rarely looked likely to lose its grip on the world crown in front of 20,000 partisan fans at the Ernst Happel Stadium in Vienna, Austria.

“We didn’t hold anything back,” admitted USA head coach Mel Tjeerdsma. “We have only been together for three weeks. I think those extra couple of days, in the group games you played every other day, and for this game we actually had four days to prepare, which is almost like American football in the U.S. I think that really helped us.

“We are really proud of our players and the preparation they put in. We had some great game plans. Offensively we were very determined, but we didn’t feel we put our best effort offensively in the Mexico game. Our offense was ready to play tonight.”