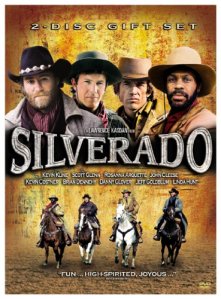 The Frontierado holiday is coming up on Friday, August 5th. As part of the buildup to this major holiday I was reviewing some very, very weird westerns now and then. But now with the countdown having begun in earnest it’s time to look at some quality westerns. For this list of the Top 4 Frontierado Westerns I won’t bother going 4 through 1 since I’ve never made any secret about how Silverado is, to me, the official movie of this holiday.

The film has all the high spirits and family appeal of Star Wars plus the well-choreographed action scenes of Raiders of the Lost Ark. On top of that Silverado features all the  highly stylized gunplay of the best Spaghetti Westerns but NOT the mud, blood, sweat and brutality of that genre. This movie is pure escapism and features the kind of preternaturally accurate gunslingers that I jokingly  describe as “Jedi Knights in the Olllld West”.

These guys (as well as most of the villains) can literally shoot the needles off a cactus, simultaneously draw and shoot with pin-point accuracy and can just “sense” when some low-down hombre might be pulling a gun on them, even with their back turned and from half a room away.

Scott Glenn and Kevin Costner portray brothers Emmet and Jake, Danny Glover portrays their African-American friend Mal, and Kevin Kline has the most layered role as the gambler/gunfighter called Paden. In the  style of William S Hart’s cowboy characters from silent movies Paden is a former outlaw trying to go straight and finds himself in an ethical dilemna.

John Cleese, as unlikable and pompous as always, shows up as a former soldier of Queen Victoria turned lawman and, since my life seems to begin and end with bad movies, there’s a bartender played by Bill Thurman, a frequent supporting player from Larry Buchanan films.

Our four heroes meet on the way to Silverado, from where Emmet and Jake plan to lead their sister’s family west to California, where Mal plans to help his father work his piece of land and where Paden encounters the villainous but appealing Cobb (Brian Dennehy), the boss of the outlaw gang Paden used to ride with. Cobb is now the corrupt sheriff of Silverado and is in league with the evil McKendrick family, the typical grasping and covetous  ranchers trying to steal as much land as possible through violence and intimidation.

Jeff Goldblum shows up as a gambler who throws in with the bad guys and the rest of Cobb’s former gang members all serve as his deputies and as targets for our heroes’ bullets.

To fully capture all the story elements of this movie would take a few thousand words, suffice it to say that the film intentionally includes almost every western action angle – gunfights galore, a barroom brawl, saloons, card-playing, a wagon train, outlaws trying to victimize the families of said wagon train, a jail break, a stampede, a barbecue shootout and some of the most memorable showdowns in cinema history at the movie’s thoroughly satisfying conclusion. Best of all, this movie was never dilluted by a sequel (though there were plans to do one), so it stands as a saga complete unto itself.

(P.S. An added bonus is the fact that several characters from the Frontierado Sagas I write interact with characters from this movie. The Blackwater Kid, Amarillo Rose, Dusty Murtaugh, Bison Bloodworth, Doc Albany and her husband Casino Bill all have connections to Paden, Mal and the Johnson Brothers.)

20 responses to “THE TOP FOUR FRONTIERADO MOVIES: NUMBER ONE – SILVERADO (1985)”