Charlie Sheen indicating the direction his career and sanity are taking.

Well, I was a busy guy yesterday ghost-writing Charlie Sheen’s “ad- libbed” rant and while I was busy turning his tin into gold (effortlessly and magically of course) the NAIA basketball tournaments continued. Since I’m not a pussy like Thomas Jefferson I had the balls to ask Charlie to do one of my fake Q&A’s  about the results of last night’s NAIA Conference Tournament Games.
Balladeer’s Blog: Well, Charlie, let’s start with the Kentucky Intercollegiate Athletic Conference. Last night in the semifinals the Indiana University Southeast Grenadiers defeated the Brescia Bearcats 108-70 in the first game. Were you expecting such a huge margin of victory?
Charlie Sheen: I like that Grenadier name. I’m a cultural Grenadier … mess with me and BOOM … hand grenades, you see what I’m sayin’? I’m like Huggy Bear, man, I smoked you first question out of the box!

BB: Uh… yeah. I’ll assume you meant that six-seeded Brescia played over their heads to upset the three seed the other night but got found out against a very formidable Grenadier team, the number one seed.

CS: Yeah, well, you know what they say about assume … when you  assume  I’m like a harpoon and whales are just the Red Baron … rat-a tat- tat! How’s that grab ya, funny maaaaaaaaan?

BB: Looks like we’ll have an All-Hoosier State finals match-up in the KIAC since the 2nd seeded Indiana University East Red Wolves also won, defeating the Berea Mountaineers 87-63. Who do you think will win, IUS or IUE?

CS: Anyone sleeping with me better be using an IUD, y’know? I do NOT shoot blanks! Nossir! I leave that for the Elliot Ness’s of the world, if that’s not a reference that will be over the heads of you and your pissant readers. I just LOOK at a hottie and she gets morning sickness, follow me?

BB: I find that very easy to believe. Anyway, in the Chicagoland Collegiate Athletic Conference the Trinity Christian Trolls and the Cardinal Stritch Red Hawks defeated Judson and Trinity International, respectively. So another one seed vs two seed finals game. You think the chalk will take it all in these two conferences?

CS: I stopped listening when you said Trolls. That’s what I’m dealing with. Fools and Trolls. WINNIIIIIIIIING, anyone?

BB: Okay, on to the Great Plains Athletic Conference, where it was also all chalk in the quarter-finals except for the five seed over the four seed matchup. The Dordt Defenders upset the Briar Cliff Chargers 69-63. What did you think of the Defenders’ free-throw shooting?

CS: Ooooooh, the De -f******g -FENDERRRRRRRSSSSSSS! Front-END-errrrrrrrs. Su- SPEND- errrrrrrrssss! I’m like, I’m like, uh, Doctor Strange, he was like, the leader of the Defenders, right, and the rest of Hollywood is like the Sub-Mariner and the Hulk, just looking up and feeling small. Jiu -JITSU baby, f*****g Jiu -JITSU! Be- FRIEND- errrrrs!

CS: Don’t get such a downer on their move, dude. They’re like me and my career. I’m leaving the Hollywood NAIA behind and moving on to the D2 of my career. I’m talking Major League 4, bubba. I’ve already got DiCaprio and Stallone on board, and I called DeNiro and said, “Yo, Bobby! You want me to stop f*****g your old lady, you better sign on for Major League 4, capisce? It’s gonna be the Peace Train, man, it’s gonna be The City Of New Orleans. New York State Throughway’s closed, man, can ya dig it?  Look THAT up in your Funk and Wagnall’s, you b*****ds!

BB: Wow, Cat Stevens, Arlo Guthrie and Laugh-In. You think you could start skewing a little younger with your incoherent references, Charlie?

CS: Old is the new young, wimp. I AM my father. Yes and HIS father. I’ve been alive forever and I wrote the very first song.

BB: Sheesh! Now a Barry Manilow bit. If your addled mind latches on to a reference from at least the 1990’s or later feel free to use it, Charlie.

CS: I guess you heard the eleven seeded Midland Warriors, fresh off their upset of the six seed the other night, fell flat and lost to the Dakota Wesleyan Tigers 82-75. And the Northwestern (IA) Red Raiders beat the Mt Marty Lancers 93-70.

BB: And “I am the Walrus” right back atcha, Charlie!

Well, that wraps up another fake Q&A! None of the preceding actually took place, except maybe in Charlie’s fevered mind. 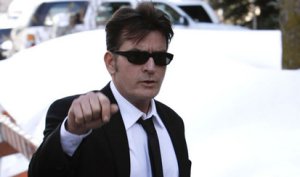 Charlie Sheen indicating the direction his career and sanity are taking.

10 responses to “FAKE Q AND A WITH CHARLIE SHEEN: ONE VATICAN ASSASSIN WARLOCK LOOKS AT LAST NIGHT’S CONFERENCE TOURNAMENT RESULTS”