Elvis IS General Andrew Jackson at the Battle of New Orleans

January 8th of each year always represents the general rift that separates American pop culture from alleged “high culture”. On the one hand it’s Elvis Presley’s birthday. On the other hand it’s also the anniversary of the Battle of New Orleans, in which General (and future President) Andrew Jackson teamed up with French pirate Jean Lafitte to hand the British their worst defeat in the War of 1812.

It’s not tough to guess which event gets more attention year in and year out, but for this 200th Anniversary of the Battle of New Orleans cult director Eddie Wozniak took a break from the film world to write, produce and direct this new musical comedy which premiered last week on the 8th. 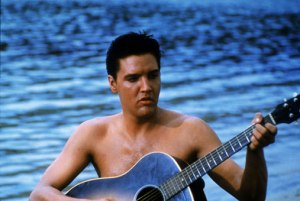 Rock’N’Roll vs the Redcoats is Wozniak’s hilarious but educational fusion of Elvis’ birthday with the martial anniversary. The musical comedy depicts the events of 1815 as they might have been depicted in an Elvis Presley movie with an actual Elvis impersonator in the lead role. So basically the star of Rock’N’Roll vs the Redcoats is a man playing Elvis Presley playing General Andrew Jackson.

If you enjoyed the musicals 1776 and Bye, Bye, Birdie you’ll no doubt love the way Wozniak works in historical trivia without deviating from the overall “Elvis Movie Feel” of the piece. Many of the songs play into this perfectly – Hermitage Howlin’ deals with Jackson’s Tennessee background, a characteristic he shared with the Man from Memphis; Rachel, Will You Marry Me Again covers the way Andrew Jackson and his beloved wife Rachel were forced to marry a second time when it was learned that she had unknowingly committed bigamy and My Tallahassee tunefully recounts the way General Jackson seized Tallahasee, FL in TWO separate wars.   END_OF_DOCUMENT_TOKEN_TO_BE_REPLACED