MUSLIM “SCHOLAR” SAYS THE SUN REVOLVES AROUND THE EARTH 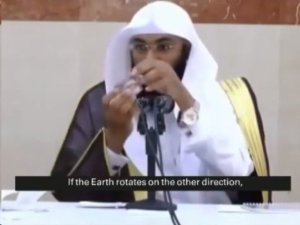 Bandar al-Khaibari blinding us with science!

Yes, it’s another one for the “Muslim Fanatics Say The Darnedest Things” File. Islamic Scholar (an oxymoron if ever there was one) Bandar Al-Khaibari was lecturing a UNIVERSITY audience in the United Arab Emirates about how the NASA lunar mission was a hoax and nobody has ever been to the moon. If that type of thinking is the end result of Obama’s 2009 command to NASA to concentrate on “Muslim Outreach” we can definitely say it was as successful as any of Obama’s other fawning overtures to the intolerant and socially retarded Muslim World.

Bandar was just warming up, however, and was soon prattling on about how the Earth stays in one position while the sun and planets revolve around it. Al-Khaibari’s explanation was a tour de force of superstition and misunderstood science. The “Muslim Scholar” (LMFAO) argued that if the Earth moved,  then when airplanes took off the Earth would leave the aircraft behind in empty space with nothing beneath them to land on. “Nailed it!” he no doubt thought to himself.   END_OF_DOCUMENT_TOKEN_TO_BE_REPLACED