THE THOROBREDS BATTLE THE GOLDEN RAMS IN THE CIRCLE CITY CLASSIC

I’m in the mood to showcase these retro helmets of the Kentucky State Thorobreds, who are celebrating their 125th year this season. The Thorobreds are 3-1 so far and hoping to keep their momentum going this weekend at the 28th Annual Circle City Classic. The Classic is played at a neutral site, Lucas Oil Stadium, in Indianapolis, and pits Kentucky State against their SIAC rivals the Albany (GA) State Golden Rams. The Fleeces, as I call them for short, bring an identical 3-1 record plus their Dirty Blue Defense and Gold Rush O-Line to the game. Both teams are END_OF_DOCUMENT_TOKEN_TO_BE_REPLACED

The Albany (GA) State Golden Rams, the defending National Champions of Historically Black Colleges and Universities (HBCU) football, are at the top of the Heritage Sports Preseason Poll. Last year Balladeer’s Blog’s readers were treated to many reports on the Golden Rams’ Dirty Blue Defense and Gold Rush O-Line all the way through the regular season into the D2 playoffs. The Fleeces (as I call them for short) were awarded 17 of a possible 20 First Place votes in the poll, with the END_OF_DOCUMENT_TOKEN_TO_BE_REPLACED 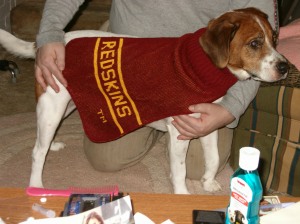 My sister Rosemary’s dog Bogie is a passionate Redskins fan. He’s also an expert on various college  sports and has been following them for all 10 years of his life so far. Balladeer’s Blog is proud to have him as our very first Special Guest Commentator. ******The following comments are strictly Bogie’s opinions and do not necessarily reflect the views of Balladeer’s Blog.

Bogie: The Indiana University Southeast Grenadiers volleyball team has won their 6th game in a row, extending their effort to turn this season around. The ladies are now 7-7 after defeating the Spalding Golden Eagles in straight sets 25-20, 25-21 and 25-12. My Mom and my Uncle (the guy who writes this blog) and I are big Marx Brothers fans and we can’t believe the Spalding teams aren’t called the Captains! Anyway, the Grenadiers try to go over 500 for the 1st time this season when they host the Fighting Engineers of Rose Hulman today!

Bogie: The Lewis-Clark State Warriors men’s cross-country team has moved up 1 notch to #19 in the latest Top 25 poll. Ironically the women’s team is at #19 in their poll as well, but that represented a drop of 3 spots. The Warriors teams will next see action tomorrow in the Eric Anderson Memorial Invite, to be run at Plante’s Ferry Park in Spokane, WA.  I’d like to give a shoutout to Spokane’s Gonzaga teams which are doggies like me but my Uncle says I can’t. I’ll just wish Coach Mike Collins and the teams good luck then.

Bogie: The Albany State Golden Rams football team, fresh off their upset of Tuskegee last Saturday, prepare to face old rivals the Savannah State Tigers in the “Rumble In The Swamp” tomorrow. This will be the 60th meeting between the 2 HBCU’s (Historically Black Colleges and Universities). The Golden Rams lead the series by a record of 41-16-2 and come into this Saturday’s action riding a 13-game winning streak against Savanna State. Kickoff is set for 2pm at Waycross Memorial Stadium. Since Tigers are a kind of cat I’ll be rooting for the Golden Rams to beat them since we dogs hate cats!

Bogie: The University of Science and Arts Of Oklahoma Drovers (Drovers are a cooler version of a cowboy) men’s soccer team remained at #10 in the NAIA Top 25,  coming off a rest week. Tuesday night the Drovers defeated the Bethel (KS) Threshers and will next face the Tabor College Bluejays today, on Drover Pitch. The Drover women’s soccer team has gotten some votes but still hasn’t cracked the women’s Top 25 just yet.

Bogie: Tomorrow, when the Cumberlands Patriots face the Bethel (TN) Wildcats on the gridiron, Head Coach John Bland will wear a Coach T Cure Muscular Dystrophy patch, like many coaches nationwide, as part of a promotion to raise money for MD research. For live audio of the game click here:  http://www.cumberlandspatriots.com/   In a  related Patriots football story, you can read about their legendary  player Madison McCalmon by clicking here:  https://glitternight.com/2010/07/25/the-truth-behind-the-legend-of-madison-mccalmon/

Now it’s off to collect my fee of a doggie treat for filling in for my Uncle!