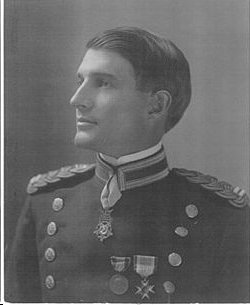 With Memorial Day fast approaching Balladeer’s Blog will once again examine neglected conflicts, military units and recipients of the Congressional Medal of Honor.

ARCHIE MILLER – Miller earned the Medal of Honor in action against Muslim slave-holders in the Philippines on July 2nd, 1909 on Patian Island. At the time Archie was a First Lieutenant in the 6th U.S. Cavalry. In a raging battle with the slave-owning Moro Muslims the crew manning a U.S. machine gun on a tripod were driven off.

Rather than allow the gun to fall into the possession of the Muslim forces Lieutenant Miller and an enlisted man rushed to the gun amid heavy fire and moved it FORWARD, toward the enemy. In the new position Archie improvised repairs to a damaged leg of the tripod and then he and the enlisted man staffed the machine gun for the rest of the engagement. The Moro eventually retreated to their cavern lairs, pursued by the U.S. forces.

Miller was awarded his Medal of Honor in the White House by President William Howard Taft in November of 1912.