With the emphasis on superhero movies these days Balladeer’s Blog takes a look at another forgotten superhero – or in this case a pair of superheroes. 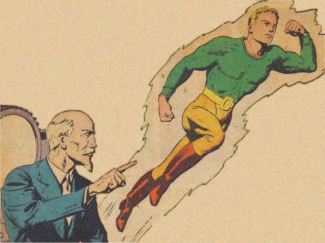 Professor Warren, a man who suffered from the lack of a first name, and his son Dan Warren did superduty fighting criminals and Nazis. The Professor fully understood that super-powers don’t come without a certain risk, which is why he was happy to use his son Dan as a human guinea pig for his High Frequency Energy Builder.

Periodic sessions hooked up to this device – which so help me resembles nothing so much as an electric chair – provided the Prof’s son with “strength equal to a thousand horse-power”, or “enough to kill a hundred men.” Sometimes even more.

Adopting the aliases Professor Supermind and Supermind’s Son the team used the same division of labor employed by Nero Wolfe and Archie Goodwin (or Jake and the Fatman if you prefer): the Prof sat around in their home base or their invisible rocket-ship (Wonder Woman, eat your heart out!) doing the brain work while Dan went out in the field taking all the risks and getting all the lumps.

As the Son of Supermind, Dan had super-strength, the power of flight, the ability to shoot rays of electricity and to project a magnetic force-field around himself. Dear old Dad’s invention the Televisoscope was a video screen that enabled him to see anywhere on Earth, apparently independent of cameras or satellites(?). Thus Professor Supermind was able to send his son into action whenever he observed trouble anywhere in the world.

Not only that but, as the ultimate in parental supervision the Prof could use the video surveillance to chastise poor Dan when he was beginning to enjoy his super-powers too much. Professor Buzzkill would remind his offspring that his powers could be taken away if he so chose and they should be used for good only. So I’m guessing super-groupies were definitely out for Dan.

Heroes are superfluous without an archenemy in my opinion and Prof Supermind & Son had a nemesis in the form of Sorel the Brain, a helmet-wearing mad scientist who deviously used Professor Supermind’s own High Frequency Energy Builder to give himself the same powers that Dan boasted.

Another supervillain battled by this father and son team was the vicious Nazi called Cruelblitz.

Apparently Dan could never make up his mind about keeping his identity a secret or not, since he went maskless sometimes and wore a Domino mask other times. In the end it didn’t matter, since he and his father were never seen again after 12 issues. I always like to think that canceled superheroes got killed in their very next adventure. But I’m kind of weird.

4 responses to “PROF SUPERMIND AND SON”