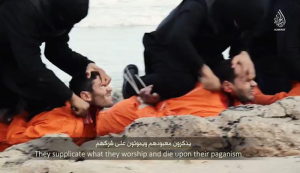 I’m a non-believer but only the most cowardly hypocrites try to deny the fact that Islam is the most intolerant and violent religion in the world at this particular point in history. The savagely superstitious practitioners of that misogynistic, homophobic and irrational belief system attack freedom wherever they go and expect the civilized world to live according to their own barbaric and ridiculously outdated attitudes. 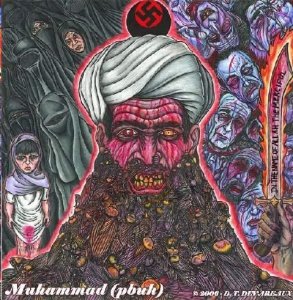 Only mindless fanatics would kill people for drawing pictures of their religion’s central figure, in Islam’s case an insane child rapist named Muhammad who died centuries ago. In Copenhagen at a Free Speech event a Muslim named Omar Abdel Hamid El-Hussein opened fire on the participants (I told you Islam hates freedom) and, following that murderous spree, opened fire on Jews celebrating a Bat-Mitzhah. (Muslims hate Jews even more than they hate freedom.)

Marriage in the Islamic State

The Libyan branch of the Obama-spawned Islamic State beheaded 21 Coptic Christians because a) Muslim savages LOVE beheading people and b) if there are no Jews on hand then killing Christians is their idea of a good time. If there are only other Muslims around then they have fun by killing those Muslims who interpret the ridiculous Koran differently than they do. The important thing as a Muslim is to kill and kill and kill and kill. Creative, civilized behavior is for infidels.

French artist Combo (lmfao), one of those hilariously pompous and self-satisfied “Coexist” panderers got beaten up by Muslims recently when he was painting one of those ridiculous banners in Paris. “Coexist” is always a joke perpetuated by cowards because the people with the crescent are the ones who always make coexistence impossible, no matter what part of the globe you are talking about right now.