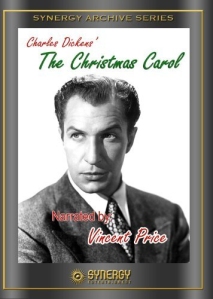 THE CHRISTMAS CAROL (1949) – This relic from the VERY early years of television was a syndicated production. It was also one of THREE productions of the Carol to hit the airwaves in 1949.

This version’s biggest claim to fame is the on-screen presence of a bearded (despite the picture to the right) Vincent Price as the story’s narrator. For my fellow bad movie geeks the one and only Robert Clarke portrays Nephew Fred to Taylor Holmes’ Scrooge. Price is the very best element of the production, which is so haphazard that it repeatedly presents Scrooge’s first name spelled “Ebeneezer” instead of “Ebenezer” like it should be.

All things considered, this is a reasonable (but bland) presentation given its brief 25 1/2 minute running time and technical limitations. With no special effects the tableau of Marley’s Ghost walking through a solid door is accomplished by a camera angle that permits the actor to dart to the right into what must have been a hollowed- out fake chest of drawers instead. You have to really be looking for it to spot it, though, so it’s a nice stage magician’s trick to provide the illusion.

Scrooge sleeps in his street clothes to avoid the necessity for costume changes in this live-on-tape production. The Ghost of Christmas Past shows Ebenezer his much younger self spending Christmas all alone during the school break then verbally chastises him for letting money drive his old love Belle away from him later in life. The Ghost of Christmas Present takes the old miser to the Cratchit household for the usual glimpse of Tiny Tim but forgoes the visit to Nephew Fred’s Christmas party.

The Ghost of Christmas Yet to Come wears the usual black robes and cowl but adds a black bandit mask for good measure. This spirit shows Scrooge the businessmen joking about an unnamed man’s death followed by the usual tombstone revelation that he is the man they were referring to. He might also have added “They even misspelled my name on my own tombstone, those bastards!” (rimshot)

Scrooge’s morning after conversion is intact, complete with the call to the boy below asking what day it is. Ebenezer and Nephew Fred then show up at the Cratchit house with gifts and food and Scrooge’s promise to help with Tiny Tim’s needs. Vincent Price ends the drama on a classy note with his reading of Dickens’ closing words from the original novel. This 1949 broadcast opened and closed with Christmas carols sung by the Mitchell Choirboys. There’s nothing genuinely moving about this rendition of the Carol but it’s a nice, quick novelty item that is at least pleasant enough to watch for us Carol completists.