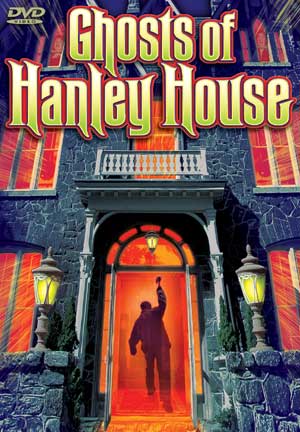 The Ghosts of Hanley House

Before MST3K there was The Texas 27 Film Vault! Balladeer’s Blog continues its examination of this neglected cult show from the 1980′s. My interview with Randy Clower, my research through VERY old newspapers and emailed memories from my fellow Film Vault Corps fans are helping to reconstruct elements of the show’s history.

SERIAL: Before showing and mocking the movie Randy Clower and Richard Malmos, our Film Vault Technicians First Class showed and mocked a chapter of the 1940 serial Flash Gordon Conquers the Universe.

FILM VAULT LORE: Randy and Richard’s presentation of Ghosts of Hanley House has occupied a very odd niche in pop-culture trivia for quite a long time. To those of us who remember The Texas 27 Film Vault this episode is famous as “the one where Psychotronic‘s Michael Weldon seems to have confused T27FV with MST3K.”

In Weldon’s 1996 book The Psychotronic Video Guide he refers to Ghosts of Hanley House as having been riffed on by the folks at Mystery Science Theater 3000. Actually MST3K NEVER showed Ghosts of Hanley House but The Texas 27 Film Vault DID. Weldon was a fan of Movie Host shows like Ghoulardi, Zacherley, Elvira and others, so it’s possible he had also sampled episodes of Randy and Richard’s show in the 80’s but the subsequent years blurred his memory to the point where he confused T27FV with MST3K in this instance.

It’s a very easy mistake to make given the similarities between the shows.

THE MOVIE:The Texas 27 Film Vault often presented low-budget movies that had been filmed right there in the Lone Star State. Larry Buchanan’s ouevre was covered almost in its entirety on the show as were films by Russ Marker and Hal Warren. Blaxploitation’s The Zombies of Sugar Hill plus other Texas oddities like The Girl and the Geek were also featured by the fictional Film Vault Corps (“the few, the proud, the sarcastic”). Ghosts of Hanley House, a low-budget horror flick filmed in Victoria, TX fit right in. 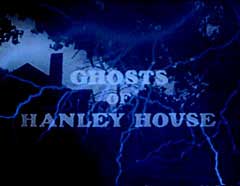 A woman named Louise Sherrill was the director of GOHH so right off the bat we have a certain novelty to this 1968 production. Sherrill assembled a cast of nobodies to portray a quintet of characters spending the night in Hanley House, a very eerie-looking old house said to be haunted by the ghosts of the late couple who owned the home and who were the victims of a brutal axe murderer. Two characters are there to settle a bet, two are there for “fun” and the fifth, a female medium, is there for research.

To try to picture the air of ineptitude and low-budget hopelessness that hangs over this black & white film imagine what a cross between Manos the Hands of Fate and The Skydivers would play like. Head shots of the characters linger on their nonplussed faces long before and after they spout their ridiculous lines of dialogue. The “story” meanders aimlessly from moment to moment with little to no reason. Much of the footage could be edited out with no loss to the narrative especially a long, boring, pointless interlude where our five leads wander the forest in a futile attempt at escaping Hanley House’s supernatural grip.

If you have any kind of appreciation for the inherent fun of bad movies GOHH is very enjoyable. The two female characters slink around in sexy negligees despite the obvious and deadly dangers presented by the house’s ghosts. Continuity is so bad that one of the women is lured by ghostly voices to a room that holds an empty coffin which causes her to faint but this is completely forgotten in the very next scene which shows the woman elsewhere in the house.

You want more? The decomposing head of one of the ghosts’ corpses is dug up and resembles nothing so much as a Mr Potato Head. There is hilariously awful day for night shooting during the forest interlude. The portrait of Mrs Hanley bears no resemblance to the actress who plays her in flashbacks to the axe-murders. Lamest of all A PAINTED PICTURE OF LIGHTNING is used over and over again as the one and only “special effect” for lightning striking.

You STILL want more? Okay, the ghost of Mr Hanley is often shown from behind in shadows wearing a hat that looks like the hood of an uncircumcised penis. No I’m NOT kidding. A very cheap red-tinted solarization effect like something from the original Dr Who series is used repeatedly throughout the film with no rhyme or reason and representing God knows what. Some of the characters dance to what the actors apparently thought would be upbeat music on the soundtrack but which is really just classical music pieces that are impossible to dance to.

And speaking of the soundtrack … Ghosts of Hanley House has the most laughably, ineptly assembled soundtrack I’ve ever heard in any bad movie. ANY. If you think a poorly-rendered soundtrack can’t elevate the bad movie status of a flick that must mean you’ve never seen this one. Weirdass sounds that don’t match what’s unfolding on screen, bizarre rock music suddenly blares out of nowhere, incidental music drowns out dialogue, etc, etc.

Multiple viewings of this movie make it really grow on you more each time, the true measure of a Golden Turkey.