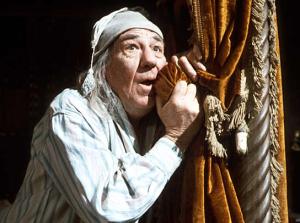 Christmas Carol-A-Thon 2013 continues here at Balladeer’s Blog! Time once again for an under-the-radar version of A Christmas Carol. This time it’s the 1977 BBC TV version starring Michael Hordern as Scrooge. Hordern was better known to some people as the voice of Paddington Bear way back when. There’s a lot of charm to this 58 minute version even though it’s got 70′s sitcom-style lighting and special effects that even the makers of the original Dr Who show could have looked down their noses at.

kept very brief, like it is in the book. Usually versions of A Christmas Carol kill the pacing by stretching the Belle portion out to an interminable length. This one keeps ONLY her two actual scenes in the original story: her breakup with Scrooge (sparing us boring, sappy love scenes written by people not named Charles Dickens) and the scene on the Christmas Eve that Jacob Marley died, when a happily married Belle is spending the holiday with her husband and their children.

Bernard Lee plays my favorite ghost, the Ghost of Christmas Present, but since he’s best known as “M” in the early James Bond films I’d rather have seen him as Marley’s Ghost so that when Scrooge makes with his “There’s more of gravy than of grave about you” line he could have retorted “DO be serious, 007.” Most of the other faces are recognizable, too, for frequent PBS viewers. This version of the Carol is comparatively short but its heart is in the right place and it squeezes more emotion into its running time than many Carols that are nearly twice as long.