“JENN WHO?”: MY FAKE Q AND A WITH THE INCREDIBLY FAKE BRETT FAVRE 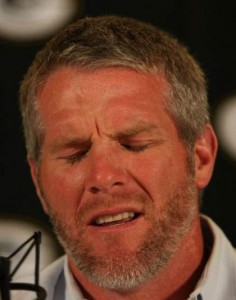 Well, “The Ollllllll’ Interception Machine” Brett Favre’s lack of cooperation with the NFL’s investigation of the Jenn Sterger matter has resulted in a whopping $50,000 fine for the increasingly repulsive- and increasingly infirm-looking –   quarterback. You just know somewhere Ben Roethlisberger must be kicking himself for not thinking of just stonewalling the investigation into the accusations against himself from a while back. He could have saved a lot of money. Well, I’m sure going forward other NFL players will realize “The Favre Approach” when being investigated is your best bet to avoid suspension and to avoid a large fine. We all know $50 grand to an NFL quarterback is like five dollars to people in the real world, so with this one move Roger Goodell has destroyed the credibility he was building up with his previous firm stances. Goodell is also inviting accusations of racism (considering his harsher treatment of many African- American players) and preferential treatment for the self-obsessed Favre. The time seemed right to do another of my fake interviews. None of the following happened and at no time did I really speak with Brett Favre … Speaking bluntly I wouldn’t be caught dead talking to this guy.

Brett, don’t you think your sickening “Aw, shucks, I’m just a regular guy” act has gotten as tiresome as it is transparent?    “Not to the ass- kissers in sports broadcasting! They still fall for it hook line and sinker! Heck and Aunt Marie, that there Trent Dilfer fella practically drops to his knees and puckers up if someone just says my name.  And y’know that Ryen Russillo guy who always tries to hold his head so you can’t see the ever-widening bald spot in the back? On that afternoon show today where he’s fillin’ in fer that Scott fella he was already serving as my apologist by dumping on Tiger Woods to distract from me and he went all the way by snidely pointin’ out that Jenn Sterger waited a couple years before filing this complaint. Garsh! He did it so well you could just hear his contempt for her and if he could’ve gotten away with it I think he would have muttered ‘Tramp’  under his breath!”

Why do you think so many men in sports broadcasting act so lovesick over you? I could swear if you sold your used sweat socks on E-Bay Colin Cowherd, Trent Dilfer and Mike Greenberg would launch a bidding war immediately!     “Garsh you talk so purrrty! What ya need to remember is that many of the fellas in sports broadcasting are either frustrated jocks or former players who washed up before they could really accomplish what they wanted. To insecure men like that, they get to live uh, what’s that ten- dollar word I hurd someone use t’other day … VICARIOUSLY! Yeah, that’s it! They get to live vicariously through me and my accomplishments and they can forget about their own failed dreams.”

Fascinating! But there are plenty of quarterbacks who have won more Superbowls than your measley one. Since the jock-sniffers in sports broadcasting generally claim winning is all that matters why do they overlook the fact that you aren’t exactly Terry Bradshaw or Joe Montana, or Tom Brady?    “That there puzzles my head, too. It surely does.”

So you’ve gotten two coaches fired at your last two stops and those teams have gone on to do just fine without you, so do you ever think those teams should have gotten rid of you instead of their coaches?     ” Har har! It shore ’nuff looks that way now! Whatcha gonna do, though? My personal P.R. representatives at ESPN always have my back so I come out smellin’ like a rose no matter what I do! ”

How does your wife feel about this whole Jenn Sterger situation? And are there other women at other organizations that you’ve treated the same way?    “Aww, gee … muh shoulder, or elbow or sumthin’ hurts. I’d love to stay an’ answer more of your questions, but I gotta go.”

Hey, c’mon. it won’t be a Brett Favre interview if you don’t conjure up some of those phony crocodile tears you’re so fond of shedding. How about some, just to remind us you’re as oily and insincere as Eddie Haskell on Leave It To Beaver?    “Naw, I don’t think I’m goin’ to, consarn it! You’ve been askin’ much tougher questions than that Goodell fella or any of them there sports news types ever do! I guess it’s because they’re just in the entertainment business, no matter how much they try to act like they’re journalists. Now I’m gonna go sell the pants I was wearin’ while doin’ this Q and A with you.”

Geez, why not auction off the underpants, too?   “Cuz Ryen Russillo called dibs on those and he’d be mighty powerful mad at me if I disappointed him.”

14 responses to ““JENN WHO?”: MY FAKE Q AND A WITH THE INCREDIBLY FAKE BRETT FAVRE”