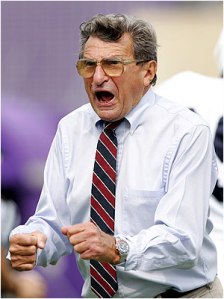 With each passing day more and more revelations come out about the Jerry Sandusky/ Joe Paterno scandal at Penn State. The culture of silence allegedly overseen by Paterno might put you in mind of a petty and selfish little man exerting far more influence than he should have been permitted to wield. The picture emerging is of a football coach often at war with administrators at Penn State who tried to keep him and his football program in line. As I’ve written many times already that part is nothing new, but the allegations of multiple child rape are making many people sit up and take notice of the festering dung pile that IS NCAA Division 1 football.

Until now the Miami Hurricanes have represented everything slimy and corrupt about Division 1 football, but Joe Paterno’s Nittany Lions fiefdom is rapidly surpassing them in the realm of sludge and savage treatment of others.