These are the legends about Charlemagne and his Paladins, not the actual history, so there will be dragons, monsters and magic.

FOR MY FIRST CHAPTER ON CHARLEMAGNE’S PALADINS CLICK HERE. 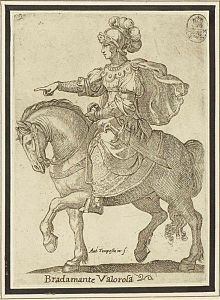 NOTE: This installment brings back Bradamante, the female Paladin in white armor, as well as the cunning dwarf Brunello. Those two characters are from tales that go back over a thousand years, they are NOT ripoffs of the female knight and the Dinklage guy from GOT. If anything they helped inspire Martin’s characters.

We back up in time a bit as this chapter begins during the time when Roland was on his quest to free Morgana’s prisoners in her castle on the lake. Marsilius, king of the Muslim colonialists who occupied most of Spain, led his forces in a new campaign against the Emperor Charlemagne. Rodomont, the Muslim king of what is now Algeria, launched an amphibious assault on the south of Charlemagne’s empire, and Agramant, the Muslim king of what is now Libya and Tunisia, likewise sailed with his legions to join his coreligionists.

While those invasions were still in the planning stages, the Garamantean Prophet made his final prophecy before dying. He advised his fellow Muslims that in order to prevail against Charlemagne and his Paladins this time they must recruit the legendary warrior Ruggiero.

Ruggiero currently resided on Mount Carena in the Atlas Mountains of Morocco, Algeria and Tunisia. His adopted father was the enchanter Atlantes who feared losing Ruggiero to the outside world and had cast a spell making him unwilling to stray far from their mountain home. The Garamantean Prophet stated that the only means of breaking that spell was to obtain the mystic ring possessed by Princess Angelica of Cathay.

NOTE: As mentioned previously, this is not the real-life Cathay region in China, but rather the mythic Cathay of Medieval times, which was believed to exist in some vague area between Europe and China.

The prophet passed away immediately after passing along this final prophecy. King Agramant stated he would carve out of his own land a kingdom to be ruled over by whoever succeeded in obtaining Princess Angelica’s ring. The cunning dwarf Brunello volunteered and set out on this mission.

By the time Brunello reached Albracca, the capital city of Cathay, Angelica was entertaining Roland, the Paladin who was a nephew of Emperor Charlemagne. Roland had returned from his quest to free Morgana’s prisoners and was being entertained by Princess Angelica, who was stringing along Roland like she did with her countless other male admirers.

While the princess was indulging in assorted distractions with Roland, Brunello used all of his skills from his days as a thief to steal her enchanted ring and returned to King Agramant. The dwarf presented the ring to Agramant, who crowned the cunning dwarf King of Tingitana.

While the Muslim kings launched their armies against Charlemagne and his empire, King Agramant and some of his army set up camp at the foot of Mount Carena. Using the enchanted ring, Agramant was able to lure Ruggiero from Atlantes’ plush mountaintop mansion.

The legendary warrior watched Agramant’s troops go through their drills and felt a longing to once again feel the thrill of battle. The king held an impromptu tournament and invited the visiting Ruggiero to participate. The man lived up to his reputation and prevailed over all competitors.

Agramant presented Ruggiero with a splendid horse named Frontino and convinced him to join in the invasion of Charlemagne’s empire. Ruggiero crossed the Mediterranean Sea with the king and his remaining forces and joined Marsilius and Rodomont in the massive campaign.

In previous installments we saw Charlemagne and his armies defeat the Muslims, driving them from the gates of Rome in the war that saw Roland and others first become invested by the Emperor. On a separate occasion we saw them thwart an invasion attempt by Marsilius in Spain. This time, however, the Muslim forces started off driving Charlemagne’s armies before them on every front, with Ruggiero doing more than his share.

Back in Albracca, Princess Angelica had long since noticed the theft of her enchanted ring and, adding to her troubled state of mind were the reports of how the tide of battle was going against the Emperor and his Paladins. Angelica feared for the safety of Reinold, despite his coldness toward her, and longed to see him once more in case he perished in the ongoing war.

She persuaded Roland to take her to visit the Court of Charlemagne once more, but concealed from him her true motive. Reinold, like Dudon the Dane serving under the Emperor, happened to be among the army currently in the Forest of Arden.

The fairy folk of Arden sought to at last free Reinold from the influence of the Waters of Hatred, which he had unknowingly drunk from on his previous visit and which had caused him to scorn Angelica ever since. While Reinold slept, the fairies dragged him by his ankles to the Waters of Love and forced him to drink when he woke up.

After drinking those waters, the Paladin immediately regretted his many rejections of Princess Angelica and longed to make amends. Abandoning his uncle’s war he rode east in search of the princess to pledge his love to her.

In a bizarre set of circumstances, Roland and Angelica had by now arrived in the Forest of Arden themselves, and the princess happened to drink from the Waters of Hatred. The first man she saw after quenching her thirst happened to be Reinold, who proclaimed his love for her. Now, however, Angelica felt nothing but hatred for him and rejected his advances in the most insulting terms.

The princess set Roland in battle with his cousin Reinold once again. The ferocity of their combat alarmed her and made her afraid of the thought of being left in the company of whichever Paladin prevailed.

Angelica fled westward, emerged from the Forest of Arden and came upon the vast military camp where Emperor Charlemagne was reassembling his forces to prepare for a counterattack on the invaders. The princess was taken before Charlemagne himself and she told him about the fierce battle between his nephews Roland and Reinold in the forest.

The Emperor and some picked men rode into Arden and separated the two combatants. He then decreed that the beautiful Angelica was now in his custody and she would belong to whichever of Roland or Reinold served him best in battle with the Muslim forces.

The next day, despite Roland and Reinold once again fighting in their ranks, the men of Charlemagne lost again to Marsilius’ army and were scattered in defeat. Princess Angelica took advantage of the confusion to escape and fled eastward, hoping to return to Cathay and her father King Galafron.

Luckily for her, she came across King Sacripant of Circassia, another of her many suitors and like her father a foe of Charlemagne. Sacripant had declared war on the Emperor at the behest of her father, hoping to crush him for good now that he was having difficulty with the invading Muslim armies.

Unfortunately, his men had not prevailed and were so thoroughly routed by Charlemagne’s troops that he had gotten separated from his own army. Angelica placed herself under King Sacripant’s protection against their common foe Charlemagne and they set out to link up with Sacripant’s men.

At length, the riding Angelica and Sacripant encountered the famed female Paladin Bradamante, one of Reinold’s sisters. Bradamante was part of Charlemagne’s scattered forces and was searching for her comrades in arms.

Sacripant exchanged angry words with Bradamante, resulting in a clash between the two of them. The white-armored and white-shielded Bradamante defeated Sacripant as she had so many other men and left him lying wounded as she rode off to find the rest of her uncle’s army.

Princess Angelica tended to Sacripant’s wounds and, with the king hanging his head in shame at having been trounced in front of his beloved Angelica, the two rode off themselves.

As it happened, in the battle outside of the Forest of Arden, when Charlemagne’s army had once again been defeated, the legendary Ruggiero had called out Reinold in the midst of the fighting. The two famed warriors clashed but were ultimately separated by the tide of retreating Franks.

Ruggiero had joined his fellow invaders in pursuing the retreating forces but so swiftly outstripped his allies that he found himself alone and lost in the Forest of Arden. Before long, Ruggiero came across Bradamante and King Rodomont, who had each dismounted and were engaged in one on one combat.

Noting that the two foes were so evenly matched that the battle might go on for hours, Ruggiero courteously called out to the pair, announcing that the Christian forces had been routed and that the Paladin of Charlemagne should join her fellows in retreat before she was surrounded.

Rodomont, however, refused to break off and insisted the fight continue. Ruggiero, smitten with Bradamante, offered to fight as her champion against Rodomont so that she could ride off to find Charlemagne’s army with no black mark on her honor. The beautiful Bradamante accepted Ruggiero’s offer and rode on her way.

She had not gone far, however, before her pride made her decide to return to deal with Rodomont herself. She arrived back at the spot of the combat just in time to see Ruggiero unhorse Rodomont with such a blow that left the fallen king helpless.

Bradamante was impressed, even more so when she saw Ruggiero permit Rodomont to yield to him rather than kill him which would have been his right. Bradamante begged Ruggiero’s pardon for leaving him to face her foe and explained how her sense of duty prompted her to return.

King Rodomont was permitted to ride away to find his men while Ruggiero and Bradamante rode along together for a time, entranced with each other’s company. Bradamante asked Ruggiero about his background.

NOTE: The “history” recalled by Ruggiero here has no resemblance to real events but was believed back in Medieval times.

Ruggiero told Bradamante that long, long ago, after the Trojan War, Astyanax the son of Hector of Troy, founded the Kingdom of Messina on the island of Sicily. From the bloodline of Astyanax eventually descended the royal lines of Charlemagne on one hand and Reggio on the other.

The Reggio line became nobles in what is now Italy, and Ruggiero told Bradamante he is descended from that bloodline. He then invited his fair companion to tell him her background and Bradamante obliged, tracing her own line to the present day and her status as a sister to Reinold and a niece to Emperor Charlemagne.

At long last their conversation was brought to an end by a sudden attack from several mounted men from the Muslim army. Bradamante fought to defend herself and the smitten Ruggiero fought at her side. The fighting was bloody and chaotic, but both Bradamante and Ruggiero were able to slay nearly ten of their opponents.

Unfortunately, the battle had covered such a wide patch of the forest that Bradamante and Ruggiero had gotten separated. They each rode in search of the other.