BEYOND THE UNIVERSE (1981): MOVIE REVIEW 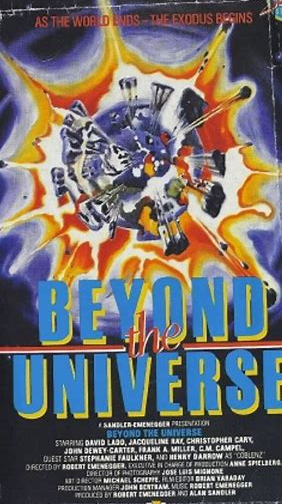 BEYOND THE UNIVERSE (1981) – Well, Balladeer’s Blog has come to the last film in the Anne Spielberg, Robert Emenegger and Allan Sandler batch. If you’re new to the Spielneggerdler oeuvre, various combinations of the trio churned out no less than TEN low-budget, mostly awful sci-fi films in 1980 and 1981. Yes, you read that right. Ten movies in just two years, with results about what you’d expect from that “quantity not quality” approach.

I reviewed eight of them in a movie marathon spirit HERE (Warp Speed, Escape From DS-3, The Killings At Outpost Zeta, Captive, PSI Factor, Laboratory, The Perfect Woman and Time Warp). I reviewed Lifepod, which I consider to be the best of the Spielneggerdler output, separately HERE and now I’m wrapping up with Beyond The Universe.

Going in, we know we’ll be getting reused actors and recycled special effects from the other nine films, assorted offspring of big-name talents of the past, and one or two “stars” in the embarrassing twilight of their careers. Usually a few members of the Cameron Mitchell clan, or even Cameron himself, tag along.

I’ve previously noted how a few of the movies set in E-Space (Emenegger Space) used the name Starfleet for their futuristic space travel organization. This time around we get a global government called the United Federation.

The year is 2081. We learn that in 1993 and 1996 nuclear wars broke out involving China, the Soviet Union and the United States. (Hey, we can look back and laugh at those wars now, but back THEN …) Those conflicts were followed in 1999 by a Five Year Civil War in which what was left of humanity fought each other until, ultimately, the United Federation was established.

Conditions on that post-apocalyptic Earth were mixed from that point on. In the plus column no more wars broke out, plus science advanced to the point where humanity has multiple space stations scattered around our solar system. In the minus column, ecological conditions never really recovered, with frequent earthquakes, forest fires, shortages of drinking water and diminishing oxygen content in the air posing critical problems.

In 2081 the United Federation, usually shortened to just “the Federation”, is drawing ever closer to imposing martial law around the entire planet. The scattered research stations in the solar system have been unable to come up with any long term solutions.

Conditions continue to deteriorate and hospitals, despite all the scientific progress, can’t keep up with all the new medical problems. They’ve become overcrowded with terminal patients and are staffed by overworked, exhausted and increasingly cynical doctors & nurses. Entire animal species are slated for extermination to save on the world’s scarce resources.

“Security” bureaucracies are taking more and more control over more and more aspects of life. The emergency is used to justify all their abuses of power. The “laser rifles” used by the security forces are the same laughable props from some of the other E-Space movies.

The Federation Council still meets, but lesser parliamentary bodies no longer do. Doctor David Croft (David Ladd, Alan’s son) has been summoned from his space research vessel the Oracle to address said council. Croft is ridiculed for his assessment that the planet Earth as an organism is suffering from a fatal cancer and is nearing its end.

Most of the abuse targeted at David comes from Trent, the Security Chief, who also heckles the supposed head of the council. We soon see that the real power resides with the Security Chief and all of Dr Croft’s palliative recommendations are shot down. The doctor is ordered to abandon his current projects and focus solely on a medical means of imposing comatose slumber on huge numbers of the population to help preserve the Earth’s dwindling air supply. Or else he’ll be arrested.

Croft accepts his orders and leaves the meeting feeling dejected. While he’s there at Federation Headquarters he encounters his old flame Dr Eve Adamson (with that name, one guess where this story is ultimately going). Eve (Jacqueline Ray) is one of those embattled physicians who are at the end of their rope trying to cope with the ever-worsening hospital conditions and the mounting death toll.

Eve and David are delighted to run into each other and she takes him to visit her elderly father, Hermes (Christopher Cary in a HILARIOUSLY bad paste-on beard). A former physician himself, he has found a faith and is now called Father Hermes. He preaches about psychic abilities and Higher Intelligences running the universe and it becomes clear that he and David have a telepathic link.

Dr Croft and Father Hermes make enigmatic references to some sort of secret, innovative project on which Hermes has been advising the doctor. Eve encourages David to have faith in her father’s plan but we viewers are kept ignorant about it at this stage. Hermes convinces Croft to go back to the Oracle and pretend he’s following the Council’s orders, but covertly work on the secret project instead.

To put another trope on the fire, there’s a yawn-inducing romantic triangle in the mix, too. We learn that when David left years earlier to take command of the Oracle, Security Chief Trent tried to move into Eve’s bed and that increases the personal stakes. Trent’s huge network of informants increases the danger, too.

Eventually, Dr Croft returns to the Oracle, off somewhere in our solar system, taking Eve with him under a false name to try to throw Trent off her trail. Unfortunately, among David’s subordinates, which include Coblenz (Henry Darrow of High Chaparral fame), lurks one of Trent’s informants.

The secret project that Dr Croft is having his crew carry out at Hermes’ urging involves unleashing their “psionic abilities.” Their ultimate goal is to contact Higher Intelligences in the universe to ask them to save the Earth, but in the meantime they make do with levitating and then shattering metal objects and projecting holograms with their minds.

Digging by David, Eve and Coblenz uncovers the horrific secret that the Federation Council’s Rehab One project which supposedly cares for the elderly and the handicapped is really a program for launching old and disabled people off the Earth and gassing them to death in space. Father Hermes turns out to have been arrested and is in line to be killed off very soon on one of those Rehab One flights.

A hasty rescue mission is mounted to save Hermes before he can board his death-ship, since David insists they need him on board the Oracle to complete their project. Croft was either lying or just plain wrong. Hermes is rescued in a daring raid but winds up just sitting there watching while David, Eve and the others concentrate their psionic energies into a device which shoots a cosmic S.O.S. to those Higher Intelligences they keep talking about.

Okay, up til now, despite the poor writing and dollar-ninety-five special effects so typical of Spielneggerdler movies, Beyond The Universe was at least showcasing some fun ideas. All of that goes out the window, now.

The Higher Intelligences have had Earth’s plight brought to their attention, but they decide it’s time for the Earth to go, anyway and destroy the planet in one big explosion. I’m not joking. Trent, who was in a shuttle craft with some of his security men chasing after the Oracle, gets comeuppance of a sort by realizing that he has no planet to go back to now.

If you’re puzzled, the result of contacting those Higher Intelligences our “good guys” thought would help us, was those beings shrugging their shoulders and deciding to just wipe out all life on Earth. But at least the bad guy got his, right? That makes it all worthwhile. (?)

Eye-rolling turned to laughs for me at the sight of what came next. A black hole forms where the Earth used to be (just go with it), and sucks in David, Eve and the rest of his surviving crew members. Instead of being crushed, they all get transformed into tranquil Philosopher Kings or something and repopulate a new planet on the other side of the black hole.

We are supposed to believe that such a tiny gene pool thrives, however, and the film jumps ahead several years to show a grey-haired David and Eve talking to their numerous descendants about how they must teach their OWN offspring the kind of wisdom needed to properly run a society. This ending is even less convincing than the dye-jobs or wigs used to grey the hair of our main characters.

We leave the oldsters as they are about to regale their youthful audience with a tale about a long-gone planet called Earth.

And sadly, we now leave Emenegger-space forever! I’ll miss getting to type Spielneggerdler. It’s been a fun journey with one half-decent movie (Lifepod), two unwatchably pathetic ones (Time Warp and The Perfect Woman) and seven pretty lame ones (the rest of this trio’s output).