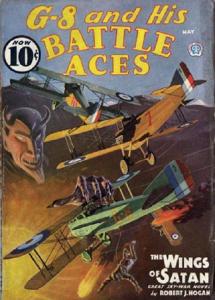 This continues a story-by- story look at the adventures of this World War One American fighter pilot who – along with his two wingmen the Battle Aces – took on various supernatural and super- scientific menaces thrown at the Allied Powers by the Central Powers of Germany, Austria- Hungary and the Ottoman Muslim Turks.

31. SCOURGE OF THE SKY BEAST (April 1936) – Doktor Krueger returns yet again! This time the little fiend is reworking a super-scientific menace that he used against the Allied Powers in the very first G-8 adventure, The Bat Staffel. The plane-sized giant bats are back in action but this time are improved to the point where they may be impossible for Allied pilots to overcome.

Are these yet more mechanical monstrosities like the first set of giant bats turned out to be? Or has Krueger managed to find – or create – the mythical creatures the first Bat Staffel was based on? This tale keeps the reader guessing at times but in the end G-8, Nippy Weston and Bull Martin emerge triumphant yet again and make the skies safer for the Allied forces.

Scourge of the Sky Beast also features a nice comic-relief bit where Nippy tricks Bull into masquerading as his “manservant” to help G-8’s heroic efforts. Later in the story Bull shines by fooling even Doktor Krueger when he disguises himself as a French officer.

32. THE WINGS OF SATAN (May 1936) – In past G-8 adventures we’ve seen the Central Powers strike up alliances with Martians, lost tribes of cavemen and other bizarre forces. This time around they go all the way and form an alliance with Satan himself! Allied planes are being blasted from the sky by a monstrous, gigantic winged Satan while smaller subordinate devils wreak havoc on the Allies’ land forces.

Even worse, the stoutest-hearted soldiers and pilots are losing their nerve at the thought of facing the ultimate evil incarnate. G-8 and his Battle Aces are once again all that stand between the Allied forces and a complete rout. Our heroes discover that their arch-enemy Doktor Krueger is behind this latest threat and is running a giant bluff, striking at both the bodies and the superstitious minds of his opponents in hopes of turning the tide.

G-8 is among the pilots struck down by the gigantic Satan-figure. He survives the crash-landing but is hospitalized with a concussion … as a POW! The fiery, explosive inferno unleashed at the end of this exciting adventure seems to bring about the final destruction of Doktor Krueger … or does it? 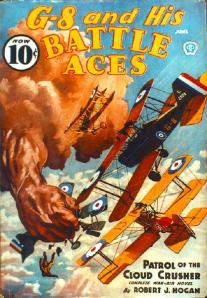 33. PATROL OF THE CLOUD CRUSHER (June 1936) – Of course it doesn’t! Yes, it’s all Krueger all the time this go-round. Patrol of the Cloud Crusher starts out with a bandaged Doktor Krueger alive and recuperating from wounds suffered at the end of the previous story. The little madman is demonstrating his latest top-secret weapon for the German brass.

That weapon: a giant arm that can materialize out of seemingly normal clouds and crush Allied planes in its massive clutch or punch them out of the skies with its enormous fist. Tactfully the German brass avoid mentioning that this is just a rehash of the “giant sword-wielding hand that could strike out of nowhere” that Krueger used in The Sword Staffel.

Even more tactfully the Herr Generals avoid mentioning that it’s an INFERIOR version of that menace. After all, if G-8, Nippy and Bull could put the kibosh on a giant arm that had a giant weapon, naturally they’ll be able to counter a giant arm that’s unarmed … uh, weaponless. It’s all-out Pulp action as our heroes struggle … well, put forth a modicum of effort … to overcome a LESSER version of a menace they’ve already defeated! You’ll yawn with excitement at the dull repetiton of it all!

Readers get treated to at least a little novelty with R-1’s appearance in this adventure. G-8’s lady-love drags her beau’s reluctant manservant Battle into spy action with her at one point. R-1 even impersonates a female German spy who has the hots for G-8. She also steals a plane that she then flies back to the Allied lines.

21 responses to “PULP HERO G-8 AND HIS BATTLE ACES: STORIES THIRTY-ONE THROUGH THIRTY-THREE”