Foolkiller and his Purification Gun

Superheroes are everywhere these days! Wonder what all this is about? FOR PART ONE CLICK  HERE

Foolkiller (Greg Salinger) delivers some vigilante justice to a Maggia-run nightclub in Miami. In the process he tangles with another obscure Marvel Comics supervillain.

We’re up to issue number three of the Foolkiller solo series.

In the opening teaser Foolkiller stops a rape in progress and naturally shoots the rapist to pieces with a white energy blast from his Purification Gun.

Next the story finds Greg Salinger, guitar in hand, playing his macabre combination of Heavy Metal and Proto-Goth music at a small Miami bar catering to bikers and such. After the performance he and his ad-hoc backup band hit the Miami nightlife and during the course of their partying and club-hopping they pass a nightclub that is done up in art deco. The sign above the entrance says “Tommy’s Joint.”

The others inform Greg that it’s a gay bar run by Tapping Tommy, a washed-up song and dance man who lost all his money and his movie studio years earlier. He had made the news back then for kidnapping millionaire Kyle Richmond (Nighthawk) with the help of Maggia-supplied robots and went to prison. He’s out now and runs the gay dive where he often performs his campy old numbers to the tongue-in-cheek delight of the crowd. 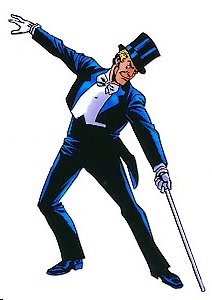 The next night Foolkiller breaks into Tommy’s Joint and discovers that the Maggia does indeed own Tapping Tommy and his club. Back when his attempt to get ransom money for Kyle Richmond failed the Maggia broke both his legs for failing them. Now that he’s out they financed replacement bionic limbs and set him up running a gay establishment for him and his fellow gay people.

The catch is that Tommy has to periodically engineer blackmail setups with high-placed political or financial figures who are closeted gays. The Maggia then has them in its pocket. Tapping Tommy also provides occasional runaway teen boys for “entertaining” wealthy pederasts and for occasional snuff films.

Foolkiller takes action and is opposed by Maggia-supplied robots who seemed to be nothing but statues of old-time movie stars and dancers. Our protagonist blasts his way through them all and faces Tapping Tommy, whose bionic legs are so powerful he can leap and kick to super-powered levels. Tapping Tommy is extra-motivated since he knows from news reports that Foolkiller has served in the Defenders, the super-group that thwarted his kidnapping scheme.

After a destructive battle that trashes Tommy’s Joint the Foolkiller succeeds in blasting Tapping Tommy to bits and freeing the latest trio of thirteen year old boys that were slated to be sold to depraved madmen.

(To keep things gritty and in a morally grey area Foolkiller would have been forced to shoot Tapping Tommy’s bionic legs off to avoid being kicked unconscious by them and to stop Tommy from leaping away from his Purification Bursts. He would then wrestle with his conscience a bit before blasting the now-helpless Tommy to death.) +++

I’LL HAVE THE NEXT INSTALLMENT UP IN THE NEXT FEW DAYS.