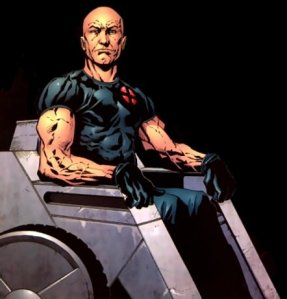 Charles Xavier isn't who SXU is named after, but here's an artist's rendering of how Professor X will look watching the NAIA Selection Show this Sunday. Dude, move your tv in front of you!

CHICAGO – In an effort to both celebrate its second straight perfect regular season and Mid-States Football Association (MSFA) Mideast League title as well as promote its first-round match-up in the 2010 NAIA Championship Series, the No. 3 ranked Saint Xavier University football team will host a special “Selection Sunday” celebration on November 14 at the Shannon Center in Chicago.  The gathering will begin at 1 p.m. in the main arena of the Shannon Center and fans will have the opportunity to purchase tickets in advance to SXU’s first round game, which will take place on Saturday, November 20, at 1 p.m. at Bruce R. Deaton Memorial Field in Chicago.

At 2 p.m.this Sunday the 14th, Victory Sports Network will air a live “NAIA Championship Series Selection Show” on-line via its Livestream channel to officially announce the pairings for the 2010 postseason.

(Saint Xavier (11-0 overall/7-0 MSFA) has a bye this week to close out the regular season and currently awaits its seed and pairing for the 2010 NAIA Championship Series.  The Cougars won their second straight MSFA Mideast League title last Saturday with a convincing 30-6 victory over then-No. 7 ranked University of Saint Francis (Ind.).  )